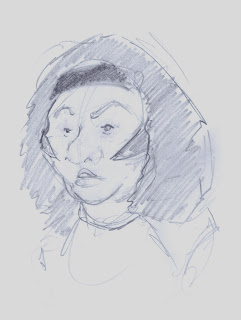 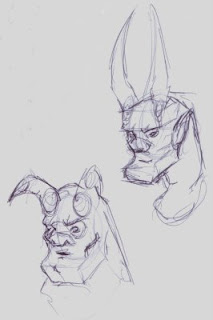 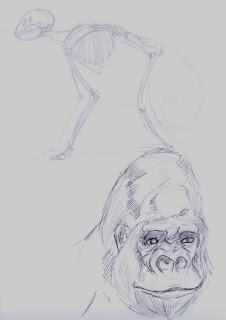 ok so to finish off talking about the pictures, the top one is just a really quick caricature of the main actor from balls of fury. The only thing I really captured about him was his cheek-burns, which I am totally going to consider trying to pull off myself. The second pic in this one is just some demons, for my show thingy. However, I had actually been working on it, instead of just those 2 ugled roughs,but I lost the paper pad I was sketching on. So that's how come this post isn't the megaton start I had wanted. The last one is just a sample of some animals I was drawing. I was dabbling a lot in anatomy, and animals, but I thought it would be really dry to post up a bunch of those so I just chose 2 I liked, that I thought looked nice together. And I draw in pen cause I'm dangerous like that (and I never have erasers handy anyways)
Now for some actual blogging. I know I said this would be up yesterday, but I had a day off and I thought why waste it by scanning stuff. so I had friends over to, play rockband and make a cube (It's a format of playing Magic). It was a totally awesome idea, and now we can use all those old rares that were just sitting around. Again, I reiterate that I had more drawings to post up, but my pad is MIA, and I worked an 11 hour shift today, so I didn't feel like drawing to make up for it. I'll post up some portfolio stuff on monday when I (should) have another day off, and got a camera to take pics. Oh, and I had the scare of my life, apparently my fees hadn't been paid, cause of an unlucky misunderstanding. Right now I'm paranoid my spot in animation might get voided. :0
Posted by Kevin Williams at 10:24 PM