Ok, I truly do not paint a lot, and I have a bunch of subway sketches and stuff I could throw up, but it's always nicer/easier to just put more finished work on here, even though it's horribleh.
Anyways, this is the painting done for the still life requiring a reflective surface, and a drapery. I may touch it up a bit before I hand it in. 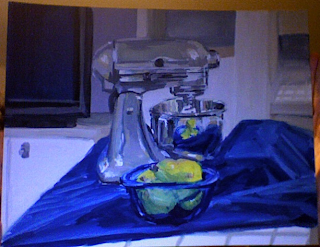 Now onto the real reason I'm posting. Congrats me, another birthday!
I like to think that I'm now a man 20 years in the making, and eventually when I'm finished all of life's little quirks will make me into something awesome.
The last week being home gave me a lot of time to think, and too much has happened in the last month. The good thing about it is now I've decided to finish off some long term work. Up til now my goal was just getting into animation. That's done. I know I always have to keep working at it, but I can be doing other stuff that coincides. For instance I have a story I've been working on for four years, In which I mean I think about it everyday, and occasionally jot down ideas, but I never actually have finished it to a point I can give it to someone else to read. I'm also going to get in better shape. I was doing really well at the beginning of the year, and once I stopped, I just started waking up later, so I'm done with that nonsense. And I have a bunch of books to read, instead of wasting time looking at comedy on the internet. Oh, and me and a few friends should have a film in the works, for the summer.
Now that I think about all that, I'm just going to hang up that still life painting somewhere I have to see it everyday, so I remind myself of everything I have to do.
I'll make sure the next post has a lot of cool drawings, and is less bloggy.
Posted by Kevin Williams at 7:34 PM