So I actually still can't post the whole 3rd year film, incase there is festival stuff going on, and now I'm drawing for a co-op placement out in Halifax :D! That also wants the work unseen for a while. So here's what's left that I can give you.
A few pieces of production from the film you might enjoy!
This is a video of my individual scenes from the Night Shift. Pretty much it's just all Boss, lol
His final model sheet. It was left rough, because he was only animated by 2 people. So there wasn't much discrepancy to go around (other than rushing for time). Also, gotta love those rodent teeth. 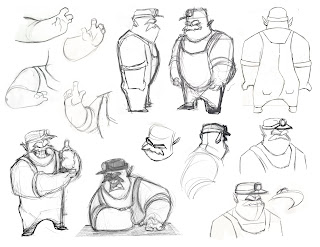 This was my first crack at the colour script. Initially I wanted this film to be monochromatic blue, up until the sky painting, but I lost that argument. The top 5 more reddy colour panels are the first try at changing the base to inject more colour, as well as experiments on how we'd be dealing with spot lights, and shadows.

The fear was always to never put too much colour in the base, or else the final Aurora wouldn't feel as surprising to Boss.
This is the second pass. Mostly the arctic changes from blue to purple, and the addition of Shen's watercolours for the opening shot. As well the base is now set in yellows and purples to make it feel more dull, then bright reds. (I got the idea from standing in line at a Tim Horton's. There is a lot of colour, just very bland)

This is the final pass at the colour script. The arctic went back to blue and the first sky Bori is in is more purpley, so that it feels closer and more connected to Boss/the Base.

This was the initial guide for how to paint the base. Using the colour script panels, people could pull swatches from this layout to paint all the other scenes. As well, a texture was added to the background to tie it in better with the water colour textured skies of the outdoors.

This is another layout I did, that I just like. It's so clean. As you can guess, I don't do layouts, and I don't do cleanups, but I had to learn for this film, this drawing is a testament to that for me! 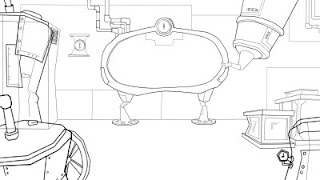 Come September I'll post the whole film. There are some amazing shots, and cinematography in it. It's really worth seeing to just look at Dan Tsvyatskov's seamless 3D work for the Base, and Zambonies.
I'll be trying to update more, as I throw out as many 4th year concepts as I can in the coming months.
Posted by Kevin Williams at 9:38 AM