Another kind of art

Apparently I have a knack for model painting. My friend collects a whole bunch of warhammer figurines to use for playing various games, and wants to start putting a dent into the unpainted portion of his collection, so he's asked me for help.
Today I painted a Carnifax (I think that is what it's called lol.) He had already done some of the smaller ones in this red/green colour scheme so I just modified what I could to add more detail. so instead of having a plain green back I painted it as a turtle shell in browns and then did the appropriate green wash overtop. And painted him with these glowing exhaust ports all aliens have and such. I really didn't think ahead to bring a good camera so I used my cellphone. It's kinda blurry which sucks cause I spent hours on this, but the video at the end might give a clearer idea of it all. 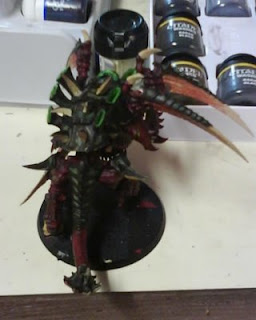 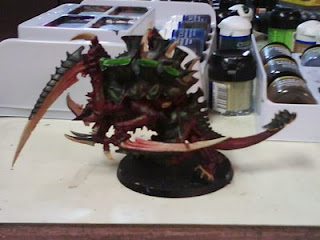 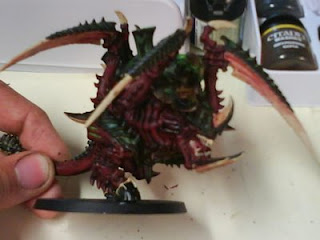 Anyways, that's how I used my first day off for the summer. I plan to do a lot more of this so you should see some interesting stuff by the end of summer. Btw, that's the third one of these I've ever done, so I'm pretty proud.
Posted by Kevin Williams at 11:11 PM

Hello Kevin, awesome stuff man, how is your summer so far? going well I hope. Been Drawing some stuff? :P btw to answer your question on my blog, I made a brush for the standard poses, however for the more obscure poses of the birds I paint them with standard brush :), the problem with using a brush to paint in sections of your paintings or little aspects like birds is that the brushes that are offered online tend to be vector meaning that you cant alter the color of the object or thing once it is put down, that's why I made my own, or at times I just paint them :)