Write, and rewrite, until it's right

Basically I want to write something great for down the road when I have the time and ability to create something good. So I come up with all these short stories, and just write, and rework them in my head all day until I get fed up with them, and then I just let them sit around for a while. As soon as I'm happy with one enough that I want to board it out, I will /promise.
Anyways, I decided that while I work out the stories, I could still play with character designs. Here's a few drawings before I go to sleep.
Oh look it's Djonar. Ok I didn't change his design really, I just needed to practice drawing. 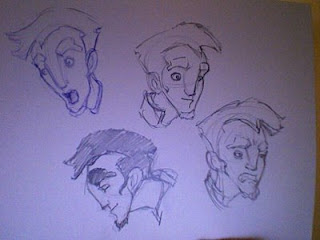 The rest are for Mesmer. So far what I got is a little dragon, is trying to figure out if he's a monster or not (Monster as in the villainous way medieval dragons are portrayed). And he get's turned into a boy. I've written out the story almost completely in about 5 or so completely different ways. Like COMPLETELY different. But I keep making each version too long. I'm sort of getting fed up with it. But I love his design, cause it's me when I was 6, lol (I think I talked about that in an older post). 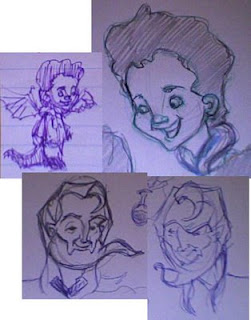 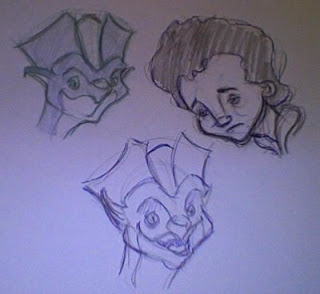 Ok and for anyone dedicated enough to keep reading. I saw UP, and I loved it. Especially the short 'Partly Cloudy'. I think the best part about Pixar's approach to story is the way they repeat elements throughout a story. They'll introduce something in the beginning, that really is small, but you know it's important, because they make it important. And I'm always impressed by how they reintroduce things. Like the grape soda pin in UP, and the football helmet in Partly Cloudy. You just have to watch the movies to get what I'm talking about.
I also have to say, 3D animation is too impressive. As a student I understand traditional is the best way to go, to learn about good design, and posing, and shot composition, but making a feature film, 3D is just amazing. You could literally see all the threads in Russel's clothes. Like no one doing it traditionally can do that. At the beginning of the year I didn't feel that way, but now I don't know where I stand on the debate between traditional and 3D.
Oh, and Jon and Kate plus 8 is too interesting. Blogging complete.
Posted by Kevin Williams at 9:50 PM

hahaha first of all jon and kate plus 8 is lame as fuck. lol. second UP was amazing, and i agree with everything u said. i love both traditional and 3d. but i feel that with 3d its harder to exaggerate, or at least i havent really seen any extreme poses/anything wacky. i think both 2d and 3d should sell in theatres, since audiences dont give a damn about technical shit (iguess as long as it remains professional/believable), they just care for the story and characters.
and im sure after working on a big project such as the 3rd or 4th yr film, you wont wanna look at ur film for a long time. and i guess if every single version of ur story seems too long, just simplify it, get rid of certain parts. a lot of times youll think something is Necessary to be there when you can have the same effect done in less time. 'what would maury do?'.. if you have dialogue, maybe reduce it, maybe you dont even need it. anywho its good to think about stories now. keep 'er up, son. im watching the lion king