I'll start off by saying, hurray I did more drawing. In other news, I've hurt my back, and am really not sure if it's just cramped up to tell me to leave it alone, or if I actually hurt it badly. Regardless I've had to sleep mattressless on my hard floor to help remedy the problem. It also means I have time off work, which I'm filling the boredom with drawing and writing, and watching 'Up' again, lol.
So for good news I amazingly found out how to finish up 'Mesmer', from start to end. I have a rough beat script, I think it's awesome, but it is unusably long. At least I think. I have to start story boarding. So I've pressed on trying to make my designs work, cause I'm having some trouble with maneuvering the face into poses that still look childish. Back to my old cell-camera uploads, sorry! (It means I can do this post in 10 minutes, instead of forever.)
This is one of the last sets of drawings, nice angry face, cute pudgy body, and him going 'oooooo' 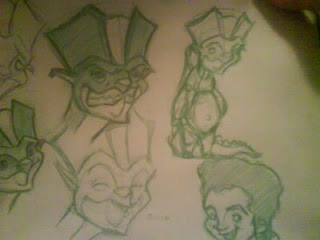 An earlier set, first try with body and figuring out the beak/muzzle movement and teeth. 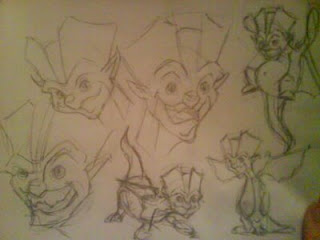 First try at a head turn, and drawing a bone under-structure. Better design for muzzle movement seen in bottom right. 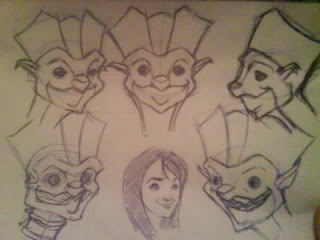 Part of the story involves him growing up, I can say that much, so I quickly drew an older version which came out well on the first try :D. so handsome. 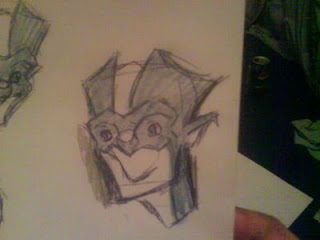 Practice pays off.  Nice pose, with the opening idea for the story. Basically the main idea is that he's a dragon in a medieval society. He's considered a monster but he wants to be a knight (you know the people that hunt dragons). So he's playing with his knight toys, unknowingly looking really menacing over that tiny town. 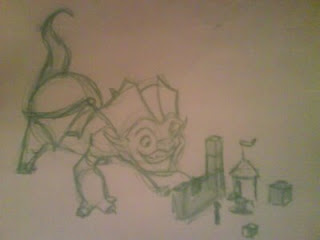 now to draw a little more, then go to bed and do it all over again.
Also if anyone knows how, I can never post more than 5 pictures at a time in these blog posts.
Posted by Kevin Williams at 9:41 PM

also - one can never see UP too many times.